This Only Happens To Me

I think I’ve told y’all before that I live out in the country with a motley crew of animals. And no people. Because I like people best with the internet between us, which is why I love y’all.

Anyway. My point was, crazy crap happens darn near every night. The kind of stuff that, once it’s over, you call a friend to tell them about it and they laugh and laugh and say, “You need to write a book.” Mostly they want me to write children’s books about all my animals. I haven’t yet because I swear too much and I think my animals probably would too if they spoke English. It just isn’t really children’s book friendly at my house. But it is blog friendly.

I went down to the barn to feed the horses (JB and Gypsy), stopping on the way to let the goat (George) off his picket line. 99% of the time, George slowly follows me to the barn, arriving just when I’m about to put food in his stall.

Last night though he got a wild hair. You wouldn’t think an old crippled goat would get wild hairs but George does. And he headed off to eat one of my pine trees instead.

Now, trees are precious up here in the top of Texas, especially my pine trees that help block the wind. So I yelled at him to quit and he just looked at me and kept going. So I ran to stop him. (Side note, goats eat crazy fast. He’d nearly stripped all the needles off a big branch by the time I got to him.)

Here’s where stuff goes to hell.

I run after George. He runs from me and tries to headbutt me. I yell at him again and finally catch him by the collar he wears. (Yes, a collar. A big dog collar. Because you need to keep a handle on a goat.) 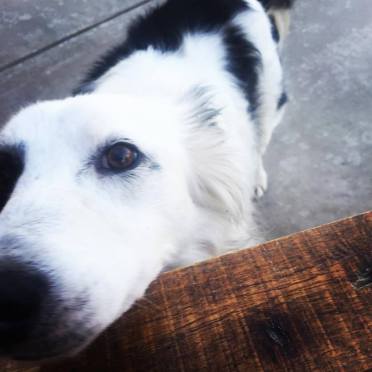 Don’t let the cute fool you. He can be a real jerk.

When I turn around and start dragging George to the barn I discover that my dog, Ice, has lost his damn mind.

He took advantage of my turned back to launch a full-on herding attack on one of the horses. He’s racing in circles biting at her. She’s spinning in circles trying to get away or stomp on him. The other horse, 32-year-old JB is standing nearby looking panicked.

So I let go of George’s collar and go racing back to the barn.

Because the horse Ice was chasing is a dog killer.

Don’t let the cute fool you with her either. She’ll kill a dog in a heartbeat.

My mare Gypsy hates dogs. Always has. She loves cats and little kids. Sort of puts up with adults and sometimes other horses. Tries to kill George the Goat all the time. And has sent Ice flying through the air more times than I can count.

You’d think that, after having been kicked, badly, many, many, MANY, times he’d learn. But nope. Not Ice the Wonder Dog. His head is made of concrete.

So, like I said, I go racing back to the barn before I have to rush a dog to the vet.

Thankfully, Ice saw me coming and backed off. I screamed at him and ordered him back to the house. And yelled and ordered over and over until he finally realized that trying to get around me and back to the horses wasn’t going to end well for him.

Finally, I think, I can go back to the barn and do what I came out to do. I turn back and see that my yelling at the dog convinced both horses to go into their stalls. 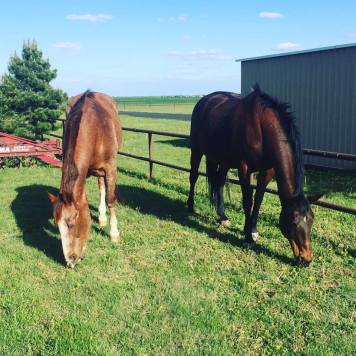 The old man, JB and Gypsy the dog killer.

They’re both pretty good kids, those two. Of course, while Ice was getting in trouble and the horses were being good kids, George had headed to another pine tree.

But I got to him before he could start eating on it.

So last night I learned that Geroge needs to be walked directly to his stall each evening because he can’t be trusted.

And the dog needs to go back to being leashed around the horses. Rather frustrating given that he’s over 10 and knows better. Because he can’t be trusted.

I also learned that my cat Finn (aka Finny O the cat-dog) is a better dog than Ice.

He was waiting in the barn, ready to help do evening chores.

This kind of stuff only happens to me, I swear.

We’re getting several cold fronts this week. I’m pretty sure last night’s insanity was due to one. That kind of stuff always throws everyone off.

I’m sort of afraid of what the rest of the week will bring.

PS. I left all the profanity out of the story, but trust me, there was a lot.

PPS. My throat is sore from all the yelling.